The other day Kenzie went to potty and she stood in front of the toilet and announced: “When I get to be a boy then I’m going to stand up to potty!”

But, if you’ve been following our adventure, you might remember that in my first post on this blog I explained how I had addressed this issue by telling her “Girls sit, boys stand.”

So naturally, I assumed that this little misunderstanding was settled.

I never imagined that she somehow believed that little girls grow up to become boys!

But since she lives in a house where she is the only female, I suppose I can see how she might draw that conclusion in some sort of twisted toddler thinking sort of way! 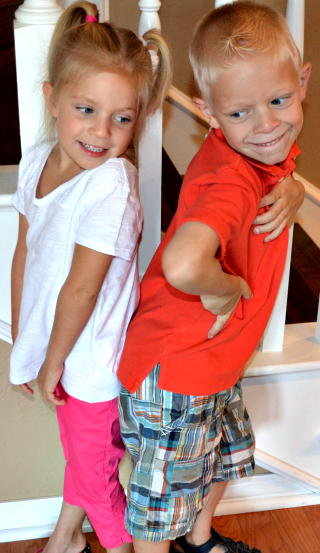 While I was explaining the facts of life to her, I recalled that Mother Goose nursery rhyme that addressed this subject of the differences between boys and girls:

Girls are sugar and spice and boys are frogs and snails and puppy dog tails!

While this nursery rhyme may sound nonsensical, I think Mother Goose had great insight into the distinctions between little boys and girls.

Although I’m no child psychologist, and certainly no Mother Goose, in my experience raising a toddler girl and boy, I have observed some distinct differences in their unique approaches to life.

Little boys get over hurt feelings quickly, but little girls don’t get over it as quickly, if ever!

One time after Kenzie got in trouble for some misbehavior, she continued to cry and cry. After awhile I told her to stop crying. It was over. So just stop crying. It’s not necessary anymore. And through her sobs and tears she moaned, “I can’t!”

And I realized, she really can’t.

2. Boys play, girls play with others.

Little girls just want to be with you!

3. Girls boss, boys do what the girls tell them to do.

You’ve probably seen or heard the pronouncement: Girls rule! But they always leave off the other part of that manifesto: Girls rule, because girls make the rules!

Little boys use physical or verbal force to get their way. Pushing, hitting, grabbing, or yelling is their MO.

Little girls are much more sophisticated.

Little girls use persuasion to get their way. Teasing, flirting, and crying are the tools of the trade for little girls. (If you don’t believe me, take a closer look at the picture at the top of this post.)

And I must admit, it’s quite effective and certainly much more so than the little boys’ approach!

3 thoughts on “The Difference Between Boys and Girls”