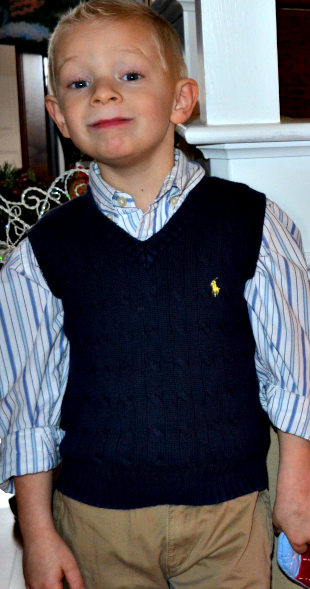 One morning as I walked the children to their classrooms at school, the principal, Mrs. Benson, was standing outside the building greeting the children as she always does.

I told Kaleb and Kenzie to say “Good Morning” to Mrs. Benson as I do each day because I want them to learn common courtesy and respect for authority. So, I especially want the principal to think that they are well-mannered children. Because sooner or later they will be making an appearance in the principal’s office that may warrant the rendering of mercy!

As we started to enter the building and the children paid their respects to the principal, she said to me, “I have a letter in the office that I need you to come and pick up.” Since we were in a hurry as we are always running late she said, “But, you can come by tomorrow and pick it up.”

The principal must have noticed the look of terror and trepidation on my face, like I was the one being called to the principal’s office, so she added, “It’s about gifted and talented.”

Tears began to well up in my eyes and a lump began to form in my throat! My chest began to expand and I could barely catch my breath!

I wasn’t sure if I was about to have a heart attack or if these symptoms were due to an overwhelming sense of relief that one of my kids wasn’t being suspended from school for bad behavior.

Or maybe it was just parent (grandparent) pride!

The next day I opened the letter and it stated that Kaleb was identified as possessing “specific academic ability.”

I’ve been aware of Kaleb’s academic ability in reading for some time. He reads very well. Very, very well. He always knows all his sight words and if he doesn’t know a word, he can usually sound the word out.

So, here it is in writing, the school certifying what I have always known, or at least suspected. My other child is a genius!

Yes, Kaleb is also a genius! Now, there are two certified geniuses in our family!

I’ve often felt like I’m being outsmarted around here. Now I know why. This explains it. The kids are both little geniuses!

Okay, maybe I’m overplaying this a little. I know how the system works. My wife was a school teacher and counselor. If a teacher observes some potential for a student to be admitted into the gifted and talented program, the teacher can make a referral based on classroom performance (thanks Mrs. Carpenter).

But, for a family who lives on the jagged edge of normality, ordinary and average is good. And gifted and talented…well, that sounds like genius to me!