It seems like I’m always saying, “I’m going to a meeting!” In fact, sometimes my life seems like one meeting after another and hurrying to the next one is the story of my life.

And the kids probably think that’s my job–going to meetings. Maybe it is!

The other day Kenzie came home from school and told me she had to get to school early the following day because she had a meeting. I was concerned that maybe I had missed a note from the school telling us that she was in some kind of trouble and we needed to meet with the teacher or principal before school. So I asked her what kind of meeting and why she would have to be at school early to attend this meeting.

Kenzie said that her teacher had called a class meeting and everyone had to be there before school started. After further interrogation, I determined that the meeting for which she had to arrive early to school was actually planned to start at 8:30 am after the school day begins at 8:15 am. Her teacher was probably trying to reinforce to these first graders the importance of punctuality. Since her concept of time hasn’t fully developed, being punctual for her class meeting at 8:30 a.m. meant she needed to arrive at school early.

The next morning came and we loaded up in the car for the drive to school. Now, there is a fine line between lateness and earliness when I drop them off at school in the morning. I don’t want to get them there too early or they will have to sit and wait in the cafeteria before they can go to their classrooms. As you might expect if you’ve read very many of my posts, they are not good “waiters” and certainly not good “sitters.”  So, the unstructured time of sitting and waiting in the cafeteria before school starts presents them with too many opportunities to get in trouble before the school day even begins!

Yet, I, want them to be at school before the first bell rings because they get very concerned if they think they are late for school. And, if they are late, I have to park the car and walk them into the building and they get a tardy for the day.

So, the challenge for me is to get them there barely on time! There’s about a five-minute window of opportunity in which to arrive and drop them off at the optimal time–not too early and not too late. Since we live a few miles from the school, the commute to their school requires some precision in timing because arriving at the school a couple of minutes one way or the other can mean that you will wait too long in the car drop-off line and the first bell rings before you drop them off or there’s no line and you drop them off too early.

And, I also have to take into account the fact that we pass through some major intersections on the way to their school and traffic is heavy at some points along the way as people are on their way to work or to take their kids to school.

I know you’re probably thinking  that I’m over-complicating the task of driving the kids to school. But I like to think of it as risk-reduction–reducing the likelihood that I get a call from the school to tell me that my kids have misbehaved…

Anyway, it so happened that on this particular day we left the house at a time that would place our arrival at school near the end of the five-minute, optimal arrival period. So, while we were waiting in the car drop-off line I explained to the kids that they weren’t tardy but we were arriving a couple of minutes later than usual so they should go immediately to their classroom.

Unfortunately, I failed to remember that this was the day of Kenzie’s first-grade classroom meeting and all she heard me say was “LATE!”

Kenzie went into a frenzy. “I’m gonna be late for my meeting,” she exclaimed!

I tried to reassure her that the class meeting wouldn’t start until after school starts and that she wasn’t late for school. We had arrived only a few minutes later than we usually do but still in plenty of time for her be on time for her meeting. But we weren’t “late.”

Her principal later told me that after I dropped her off, Kenzie dashed into the school and was scurrying down the hall to her classroom. Her winter coat was unzipped and flapping and her ponytail bouncing from the velocity of her movement. The principal attempted to slow her down and inquired what her hurry was. Kenzie exclaimed, “Oh, Mrs. Moore, I’m late for a meeting, I’m late for a meeting!”

Somehow it doesn’t seem very satisfying to me as a parent that she is now following in my footsteps and hurrying to the next meeting has become the story of her first-grade life. But, at least she’s punctual… 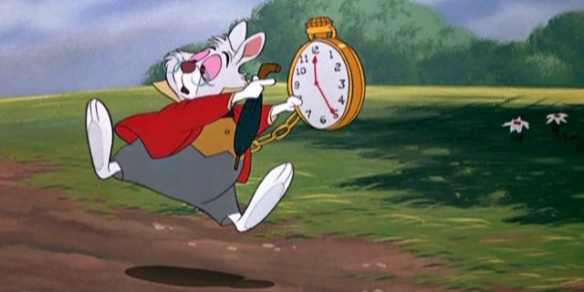