After a rough week I was sitting in church on Sunday morning feeling a little sorry for myself and thinking maybe God would send some compassion my way.

Suddenly, I had this distinct impression, this mental picture, that God was laughing at me!

Now, I suppose there’s some divine irony in my situation that warrants some heavenly humor. Here’s this old guy; he and his wife are raising two very young grandchildren; his wife dies and now he’s raising them alone.

And, what’s cosmically comical is that this guy has always been so self-absorbed that he didn’t really know much about anybody else’s needs, about his wife’s needs, or his children’s needs. He just knew what he needed, or wanted, in order to get ahead, to be successful.

So, he really doesn’t know that much about raising children and has a lot to learn about parenting that he’s having to learn the hard way!

Now, he is so absorbed with raising those little children that he doesn’t really have the time or wherewithal to be self-absorbed!

It’s ironic, maybe even providentially so! Maybe it’s God’s gift of a second chance in life to do a better job of what I didn’t do very well the first time!

ALL MY ATTENTION NOW IS ON MY TWO PEEPS!

So, maybe God just has to laugh when someone so self-centered now has to be totally centered on someone else, or in my case, two someones!

Unfortunately, for those of us who have to make the journey from from Selfish to Selfless, riding the sympathy train doesn’t get us there!

Feeling sorry for selfish people doesn’t really help them. They already feel sorry for themselves enough and others sympathy sometimes just feeds their selfishness.

Self-centered behavior is so unplugged from reality that it’s laughable!

And when you have this feeling that God is laughing at you, maybe it’s time to plug back into reality and see how ridiculous you are acting and how meaningless and totally irrelevant are your complaints!

Besides, I’ve learned that no matter how bad I think my situation is, there is always someone that has bigger problems than I could ever hope to endure!

So, when you apply a little divine humor, that “Poor little me” becomes “How really fortunate I am!” 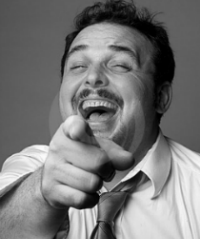 So, the next time I try to use a little downtime at church to feel sorry for myself and want God to join my pity party, I think I’ll  just snicker (not too loudly so I won’t want be caught laughing in church) and just remind myself: