Have you ever suffered from bad parent guilt?

And then guilt strikes…

Because of what you didn’t do or shouldn’t have said, your child will now carry the psychological and emotional scars of your bad parenting with her or him into adulthood.

Know the feeling? I thought so. You’ve been a bad parent, too!

And our children somehow know how to recognize, leverage, and take advantage of bad parent guilt.

They know how to use bad parent guilt to try to manipulate you in some way. And if you don’t do what they want, then you’re at least going to feel guilty about it.

I call it the parent trap!

Here’s an example of what I mean….

It’s the time of year when the kids take school field trips to the pumpkin patch. So Kaleb’s Pre-K class went one week and a week later Kenzie’s daycare class was scheduled to go.

Of course, the school invites the parents to come to help supervise the children during the field trip. So several parents including myself went along with Kaleb’s class to the pumpkin patch. But I drove our car and met them there because I decided to take Kenzie.

Besides, Kaleb wanted to ride on the bus and I didn’t, so it worked well for both of us.

Kenzie had a great time getting to do all the activities with Kaleb’s class and it was also a fun family time for us. You can see some pictures of the outing in this post.

Now fast forward one week and it’s the day of Kenzie’s class field trip to the same pumpkin patch. (Actually, the main feature is a hay maze, not a pumpkin patch.)

Her class was leaving first thing in the morning and I decided I would wait until I got her to the daycare to determine if I was going with them or not.

So, I never said anything to Kenzie about accompanying her class to the pumpkin patch because I wasn’t certain whether I was going or not. Nevertheless, I wore casual clothing in case I decided to go.

When we arrived at school, I saw a couple of mom’s there who were going. That’s when I decided not to go and let the 20-something mom’s do this one without me. (See my post, My Life Is a Midlife Crisis, on how I now seem to hang with the 20-something crowd!)

Besides, I wasn’t feeling well. I’d been fighting off a head cold caused by allergies for several days. It probably started from my previous visit to the hay maze!

So I didn’t want to do anything to prolong my illness and wandering through bales of hay didn’t seem like the road to recovery!

As we were walking into Kenzie’s classroom, she ran ahead and told the teacher that I was going to ride on the bus with their class to the pumpkin patch!

Now how and when did she concoct that plan?

I said nothing whatsoever to her about going and I if I had gone, I certainly had no intention of riding on the bus with them.

As I rounded the corner to enter into her classroom Kenzie turned and and said to me, “I love you, Dad!”

As I’ve mentioned in a previous post, Kaleb has started calling me Dad sometimes, but Kenzie hasn’t. So why at this particular time did she decide to pull out the “Dad” word?

That’s right. I see it coming. It’s the parent trap!

She’s trying to guilt me into riding on the bus to the pumpkin patch and spending a miserable day coughing and sneezing my way through the hay maze. 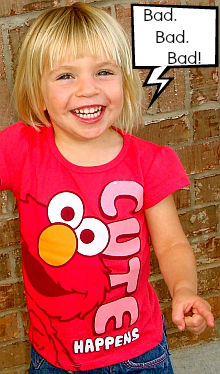 And besides, how does she know how to be so crafty at only three-and-a-half years of age? She must have learned it at daycare!

But there was no way out for me without feeling guilty. Yes, bad parent guilt.

And so that’s the path I chose.

Maybe I didn’t let her manipulate me into going on the field trip, but I paid the price in guilt for not going.

I didn’t accompany my child’s class on the field trip to the pumpkin patch when I could have gone…Bad.

And my kid wanted me to come and pleaded with me so earnestly… Bad…bad…bad!

2 thoughts on “The Parent Trap”