At our house the toddlers have lots of books. Nanna always bought books and constantly read to them, even when they were infants. So they love books and I try to read to them often, but don’t do as good a job as Nanna did.

One thing that hinders me from reading to them as much as I should is technology. (Sure, Poppy, blame it on technology!)

But you can download children’s books to the iPad that are animated and read themselves! iPad books do a much better job than I ever could. In fact, the toddlers would rather watch We’re Going on a Bear Hunt from the iPad because it animates the artwork on the pages of the book. No matter how enthusiastically I may read the book to them, I can’t make the pictures start moving around!

When I ask the toddlers to pick a book for me to read to them, they almost always pick the same books. Over and over, it seems we read the same books! And their top picks are the classic children’s stories: Red Riding Hood, Goldilocks and the Three Bears, The Three Little Pigs, and Jack and the Beanstalk. 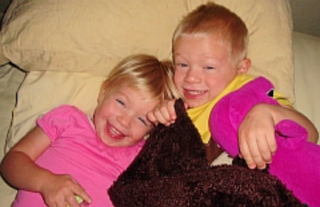 Now here’s something I’ve observed about toddlers and storybooks. The toddlers don’t make distinctions between real life and the stories in the books.

Here’s what I mean. Down the road from our house are some new homes under construction. All the leftover construction materials are placed to the side of the new home in a big pile to be hauled off to the landfill. Every time they see the pile of used materials beside the new homes being constructed the toddlers ask, “Did the big bad wolf blow the house down?”

So that their young, fertile minds won’t be overburdened with complicated explanations about the home construction industry, I just answer, “Yes, the big bad wolf blew the house down.”

Please don’t think bad of me for not telling them that it’s just a pile of trash, as I always earnestly reassure them, “But the big bad wolf can’t blow our house down because it’s made of bricks!”

Now after I tell them that, I don’t know if the brief silence that follows is a mental sigh of relief or a cognitive attempt to make sense out of all this new reality they are discovering.

Since we live in a rural area, there is a good amount of undeveloped property surrounding our house. Just as any large pile of trash must be the  residual effects from the huffing and puffing of the big bad wolf, any clump of trees is considered to be “the deep, dark woods,” the place where bears and big bad wolves reside.

Kenzie (or Kaleb) pointing at some trees: “Is that the deep dark woods?”

Me: “No that’s just a clump of trees by the road.”

Kenzie (or Kaleb): “Do bears live in the woods?”

Me: “Yes but no bears live around here.”

Kenzie (or Kaleb): “Does the big, bad wolf live in the woods?”

Me: “Yes, but Poppy won’t let the bears and big bad wolf come near our house!”

But I think the following conversation we had one cloudy day proves my point about the thin line between reality and fairytales for the toddlers:

Me: “Well, it’s not that they’re yukky, they’re just too high for us to reach.”

Kaleb, who had been listening thought for a moment and then interjected: “We need a beanstalk!” 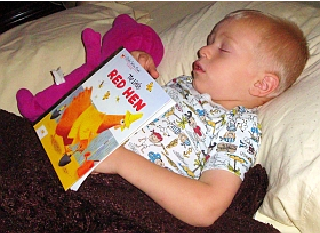 Once upon a time life was full of bears and wolves living in forests, trolls living under bridges, and clouds that you could climb up to on a beanstalk, and a superhero Poppy that could protect them from any threats to their toddler world.

But soon they will grow up and their belief in their storybook world will pass away and they will find out that their Poppy is no superhero.

Meanwhile, I wish they could remain a little longer in their imaginary world where I could remain as their hero and take care of them and chuckle at their naiveté. But life moves on so quickly and they grow up so fast.

I suppose it is with some reluctance that I must lead them into the reality of the grown-up world. In so doing, I hope I can inspire them to reserve a little bit of their childhood imagination to help them confront some of the tough realities that they will surely encounter along the way to adulthood.

Enrich your Bible study by reading my devotions at http://StevesBibleMeditations.com. Read about my parenting adventures raising two young grandchildren at http://PoppysNewAdventure.com. View all posts by Steve