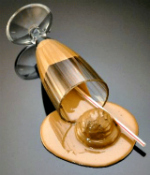 My mother always said I take things too seriously. So did my wife.

But life is serious business. And you don’t want to screw it up. Everyone should understand that–even if you’re a toddler.

But toddlers are NOT SERIOUS. In fact, with toddlers, life is a game, life is play, life is all about having fun.

Don’t they realize that they could grow up and become uncivilized barbarians, brutes, heathens, if they don’t take things more seriously? They can’t continue to be so carefree and have any hope of ever becoming productive members of society!

So, let me tell you what happened last Saturday and I think you’ll begin to understand my concern…

You might recall if you’ve been following my posts that Sissy is in the midst of potty-training. She had just done No. 1 and 2 in the potty and so I felt like we were on roll!

Yes, the perfect opportunity to take the toddlers out had presented itself!

I got them strapped in their car seats and ran back into the house to get something. By the time I got back outside she had wet herself–and the car seat!

The day was ruined! I swore that there was no way we were going to make a milkshake run because now it wouldn’t be, it couldn’t be, any fun. But what was so infuriating was that Sissy didn’t even seem to feel bad about what she did.

Didn’t she realize she had just spoiled our day?

So by the time I finished changing her I felt guilty because Kaleb was an innocent by-stander to this fiasco. Why must he be punished for Sissy’s indiscretion? So I recanted on my oath not to take them to get a milkshake and again we loaded in the car and went on our way.

After arriving at the store and watching this amazing new machine prepare milkshakes (Did I mention that they each had to make a run to the bathroom in the store while the machine was making their milkshakes?), we proceeded to the check-out counter to pay, each one carrying their freshly-made, thick and delicious chocolate milkshake! (I planned to share Sissy’s milkshake with her as I was sure it was more than she could drink herself.)

At the check-out counter I also ordered a corndog for each of us. This was certainly going to be the perfect Saturday. Now I wouldn’t have to figure out what to cook for lunch because we had corndogs and milkshakes! As I turned to check on the location of the toddlers, Kaleb walked up with his milkshake and proceeded to drop it on the floor (and my foot) right in front of the counter.

The clerk ran around the counter with some towels and started sopping it up. I recovered the milkshake cup with about a third of it left in the cup. I took it over to one of the little dining tables in the store and made Kaleb and Kenzie sit down at the table with their milkshakes .

I went back to the counter to pay, apologizing profusely for the mess in the middle of the store. While I was paying, I glanced back and now Sissy had knocked her milkshake off the table and it spilled all over the floor around the table!

Again the clerk came running around the counter with some towels. But this time she just threw the towels on the spilled milkshake and returned to the counter, presumably to complete my transaction so we would leave the store before any more accidents occurred.

I recovered about a third of her milkshake, paid the clerk, and got us out of there as fast as I could.

I was furious! I was outraged!

I swore I would never take them anywhere again. How could they be so careless! And most of all, why weren’t they as upset as I was about spilling their milkshakes and causing all this trouble and embarrassment!

If they were upset, it was only because I was mad (though making me mad seems to be a great source of enjoyment for Sissy)!

I guess I am finally starting to see some humor in it all after several days. However, at the time it seemed like their lives were headed for ruination and my care and tutelage was having little or no effect on their descent into a life of barbarism! 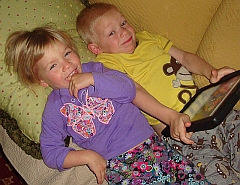 OK, so I’m being melodramatic. But that’s what overly serious people like me do. Why I’m the archetype for the old saying, “Don’t cry over spilled milk.” I’m the quintessence of making the trivial significant!

Yes, I take things too seriously and their toddler ambivalence causes me a lot of frustration. So maybe it’s my behavior, not theirs, that we should be concerned about!

After all, they’re small and cuddly and carefree for only a short while. Why impose all my adult expectations on them so early in their, thus far, brief lives?

“So ease up on them, Poppy,” I tell myself. Sometimes, you may need to stop and take a deep breath and take heed to the lyrics from a song by that famous British rock band and just Let It Be, Let It Be…